Most of us know what the 7 wonders are, and for many travel lovers visit one of them is a real goal. But, do you know the 7 wonders of the ancient world?

The seven wonders of the ancient world were a set of architectural and sculptural works that the Greek authors considered worthy of being visited and admired. Unfortunately, all of them are in ruins or disappeared, only Pyramids at Giza still stand. However, these amazing sites represent the culture and history of humanity. These 7 wonders were digitally reconstructed by Budget direct, so we will show you what they would look like these days.

Who hasn’t dreamed about being a real Egyptian? Well, as soon as you get to these pyramids you’ll go back in time!

Built over 4,500 years ago from stones weighing 2.5 to 15 tons each, the Great Pyramid remained the world’s tallest man-made structure for nearly four thousand years. Nearby excavations have revealed it’s likely that up to 100,000 skilled and well-fed workers came from all over the country to live in a temporary city as they built the otherworldly pyramids of this region. Plus you can still visit this awesome place. 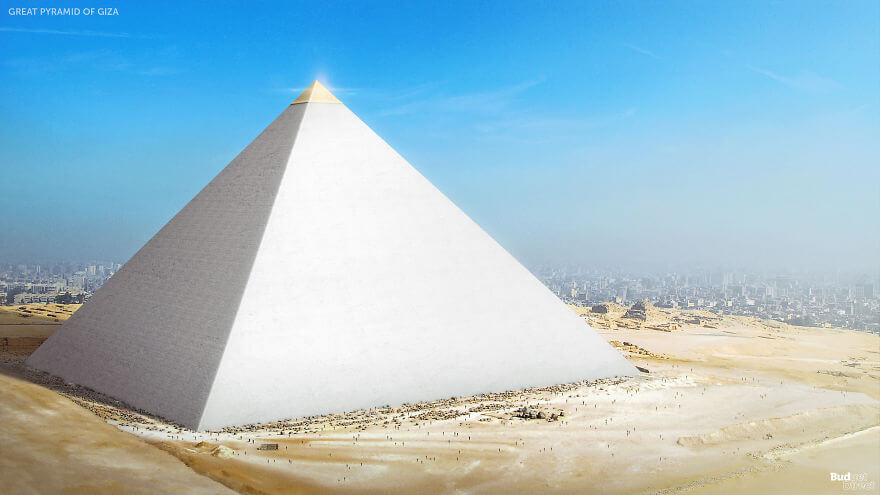 the Colossus of Rhodes was a massive statue of a male figure built around 280 B.C. and erected on the Greek island of Rhodes. Much about the monument remains shrouded in mystery, as it was destroyed in an earthquake in 226 B.C. However, ancient accounts hold that the Colossus of Rhodes was created in honor of the sun god Helios and to commemorate the Rhodians’ successful defense of their island against a siege led by Macedonian leader Demetrius Poliorcetes in 305 B.C. Legend has it the people of Rhodes sold the equipment left behind by the Macedonians in order to bankroll the statue’s creation. 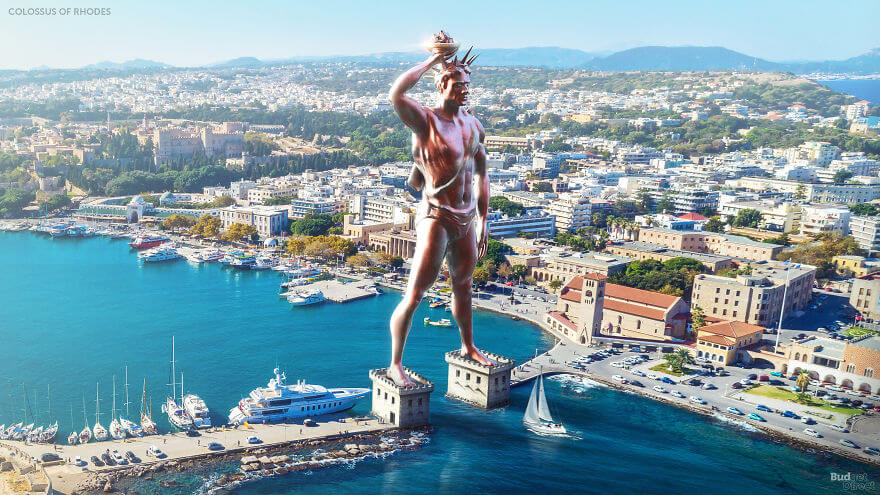 Did the Hanging Gardens ever actually exist? They’re the only wonder on the list that may have been a figment of an ancient travel writer’s imagination. The native writers of Babylon (which was 50 miles south of what is now Baghdad in Iraq) made no mention of the garden. The image of the gardens is impressive not only for its beauty but also for the engineering feat of supplying the massive, raised gardens with soil and water. 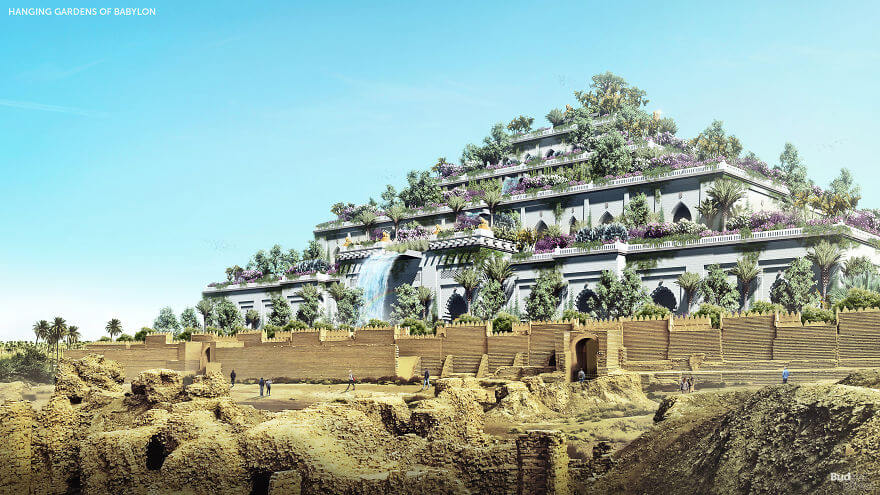 The lighthouse of Alexandria was designed by Sostratus de Cnidus and served as a model for all the lighthouses that were subsequently built. At its peak, the fire glowed, and within it was a statue of the Sun God, Helios. The building fell into disrepair sometime between the 12th century and late 15th century and then and a fort was built on its ruins. 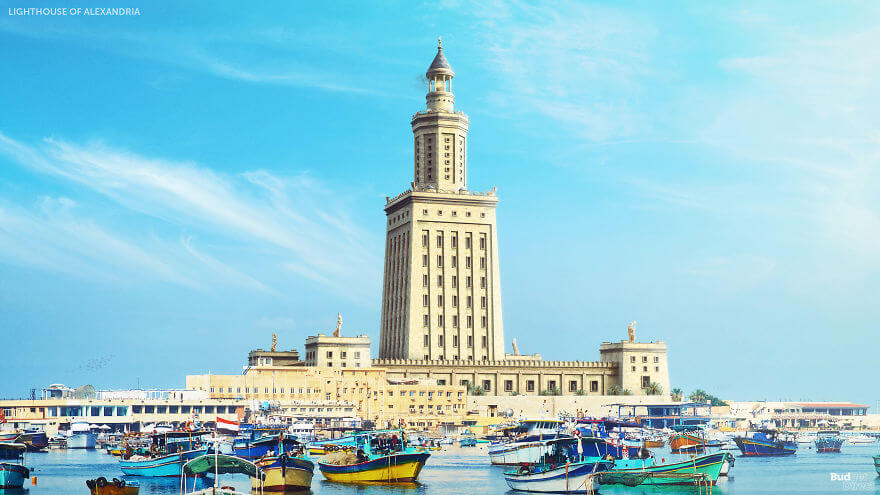 The tomb built for Mausolus, ruler of Caria, an ancient region of Asia Minor was so impressive that the late king’s name became the generic word for large funeral monuments. Mausolus commissioned many great temples and civic buildings in his life and planned the Mausoleum himself. The structure was a mixture of Greek, Near Eastern, and Egyptian design principles set in Anatolian and Pentelic marble. 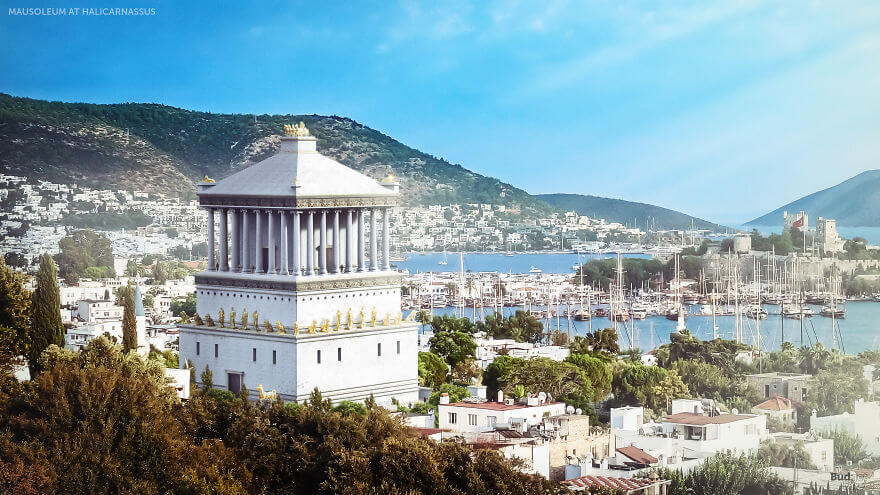 Statue of Zeus, at Olympia

The statue was one of two masterpieces by the Greek sculptor Phidias and was placed in the huge Temple of Zeus at Olympia in western Greece. The monument part of the 7 wonders of the ancient world was almost 12 m (40 feet) high and plated with gold and ivory, represented the god sitting on an elaborate cedarwood throne ornamented with ebony, ivory, gold, and precious stones. The statue, which took eight years to construct, was noted for the divine majesty and goodness it expressed. The temple was destroyed in 426 CE, and the statue, of which no accurate copies survive, may have been destroyed then or in a fire at Constantinople (now Istanbul) about 50 years later. 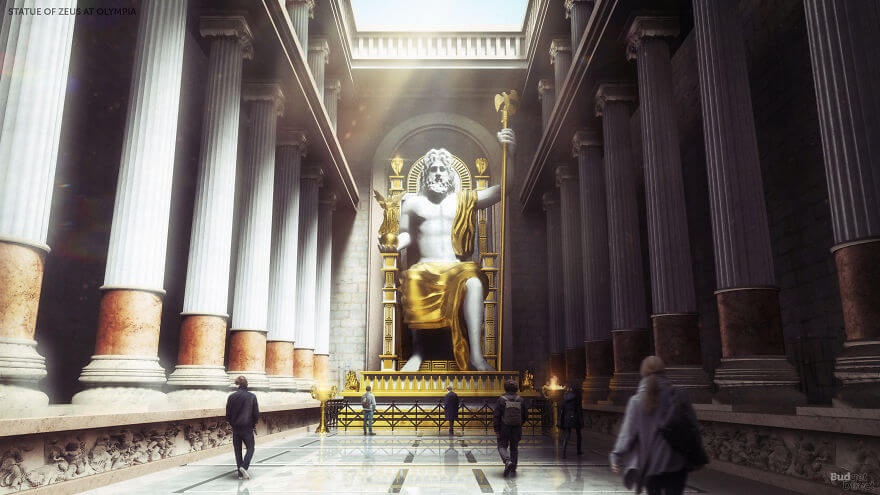 Temple of Artemis at Ephesus

The Artemesium was famous not only for its great size, over 350 by 180 feet. But also for the magnificent works of art that adorned it. The temple was destroyed by invading Goths in 262 CE and was never rebuilt. 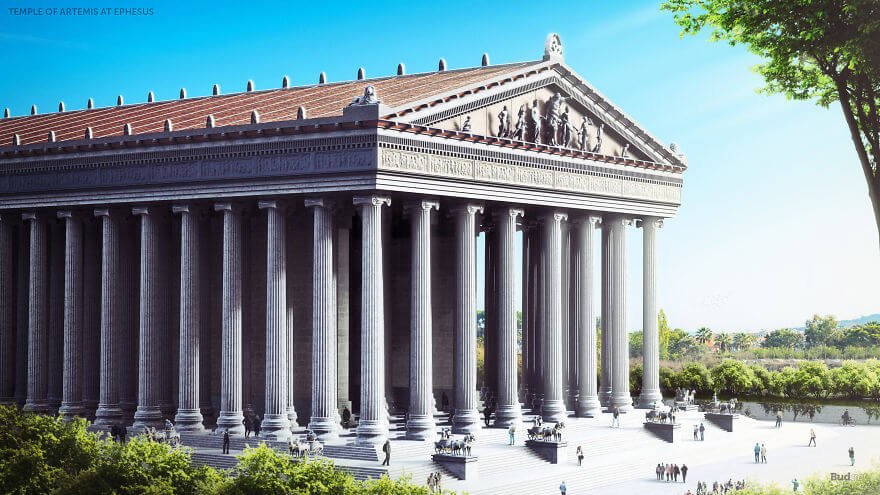 We hope you have enjoyed this post, we also have a post about the 7 wonders of the modern world.

Thank you for reading!