There are amazing places around the Yucatan Peninsula, and most of them are less popular than others. Discover Balankanche Caves and fall in love with this amazing site in Yucatan, the best part; is near to Chichen Itza. These caves could be one more stop in your Chichen Itza trip!

Balankanché (which means the ‘Throne of the Sacred Jaguar’) Cavern is a network of caves near the famous site of Chichén Itza.  It was used by the Mayan civilization for religious ceremonies. It was re-discovered in modern times during the early 20th century and has subsequently been studied by scholars. Today, Balankanche Cavern is a tourist spot.

Amaze yourself with this underground world, In ancient Mayan belief systems, a cave is a sacred place. Caves offer a portal to Xibalba, the Mayan underworld, where the spirits of the valiant dead tangle with supernatural beings, and the roots of the great World Tree are found.

The entrance to the caves is surrounded by lush tropical foliage. Many of the indigenous plants are labeled. The main attraction are the caves.

When you descend into the caves you will see the natural formations.  You will pass through rooms along a concrete meandering path. Toward the end, you will see ceremonial objects almost as they were found when the caves were discovered. Those sacred objects are 800 years old!

We highly recommend you to discover Balankanche Caves, you will learn about the amazing Mayan Culture and the great history of this stunning place. The site is open from is open daily from 9:00 am-5:00 pm. and the cost is about $150 Mexican pesos approximately. Wear comfortable shoes, and bring some mosquito repellent. 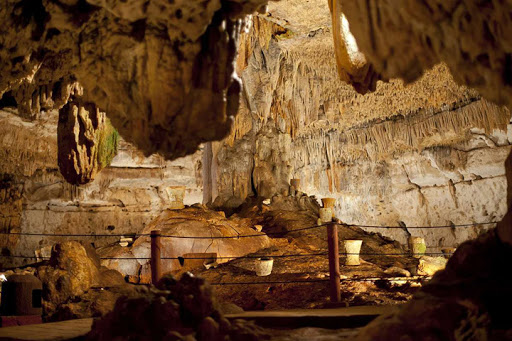 Nearby interesting sites to visit