Chicxulub crater Secret’s – A new study published in the journal Astrobiology, assures that the Chicxulub crater, located in Yucatan, housed an underground ecosystem that may have helped the emergence of primordial life on Earth.

Earlier this year, an international team of scientists, led by Dr. David Kring of the Association for Universities Space Research at the Lunar and Planetary Institute (LPI), demonstrated that Chicxulub crater was home to a vast hydrothermal system that persisted for hundreds of miles of years, if not millions of years.

When life could not exist on the Earth’s surface, scientists wondered, could it have lurked beneath the crater floors in underground hydrothermal systems that flowed through rock fractured by the Chicxulub asteroid impact?

The lead author of this study called that idea the Life Impact Origin Hypothesis. 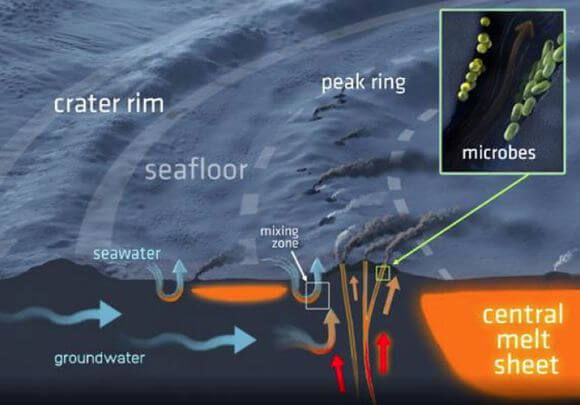 The ancient underground ecosystem was revealed in a rock core extracted from the peak ring of the Chicxulub crater.

Using 15,000 kilos of rock recovered from a 1.3 kilometer deep well, the authors located small spheres of pyrite, only 10 millionths of a meter in diameter.

Sulfur isotopes in the mineral showed that pyrite spheres, called framboids, were made up of a microbial ecosystem adapted to the hot mineral-laden fluid of a hydrothermal system traversing the shattered peak ring of the Chicxulub impact crater.

The search for that evidence has taken 20 years since a link between Chicxulub, the potential life promoter of a hydrothermal system with impact craters, and the origin of life on Earth was first postulated.

Chicxulub crater is the best preserved on the planet

The Chicxulub crater, approximately 180 kilometers in diameter and 65 million years old, is the best-preserved large impact structure on the planet.

Also, it is the best example of the types of craters that occurred during a period of heavy bombardment of more than 3.8 billion years ago.

Impact events during the Hadean period were common and often immense, producing craters miles of kilometers across.

Previous research suggested that the largest of these impact events episodically vaporized the oceans and engulfed the planet in an atmosphere filled with rock vapor.

During those times, the Earth’s surface was considered habitable.

In a series of studies over decades, scientists demonstrated that the Chicxulub crater had a permeable and porous underground environment; that the crater housed a vast hydrothermal system; and finally, in the current study, that the system harbored a microbial ecosystem.

The new finding is a major shock and suggests that sites from during the Hadean may have hosted similar systems that provided niches for the early evolution of life on our planet.

Thanks for reading Chicxulub crater Secret’s!